Peloton bikes have the highest indoor fitness equipment demand, which begs the question; How does Peloton manage the demand? Where are Peloton bikes made anyway? Why do Peloton bikes take long to deliver? 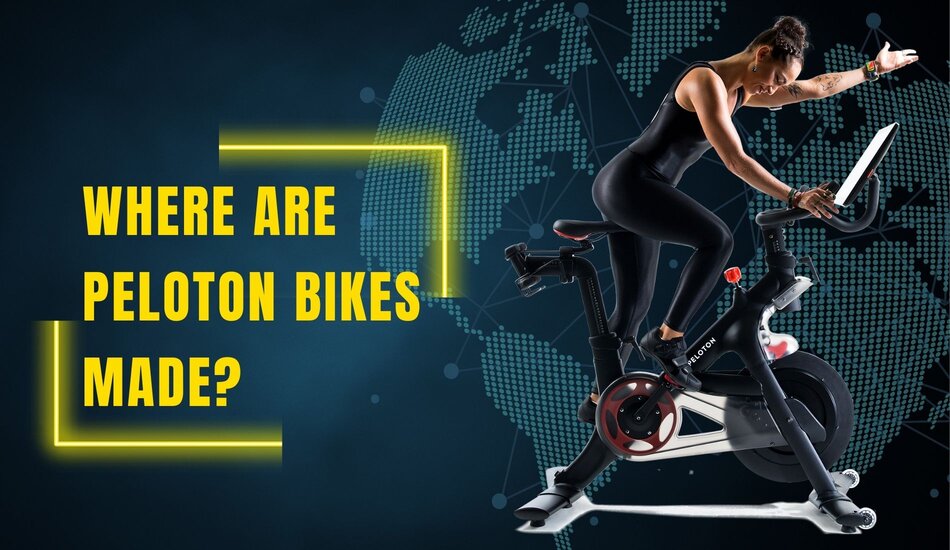 Peloton partners with a couple of manufacturing companies, some of which it has already acquired. The companies are based in China, Taiwan, and the USA. Lately, the company has also announced that it has acquired a large piece of land in the US centralized bike manufacturing. After all, much of the demand for the Peloton equipment is in the US; hence the new acquisition very convenient.

Contents show
1 So, Where are Peloton Bikes Made?
2 So, A Peloton Manufacturing Plant in Ohio, USA?
3 Suppliers of the Peloton Bikes
4 Making of the Peloton Bike
4.1 A) Bike Frame
4.2 B) Resistance
4.3 C) Belt Drive
4.4 D) Crank Arm and Pedals
4.5 E) Flywheel and Transport Wheels
4.6 F) Console Features
5 The Peloton App Design
6 Frequently Asked Questions (FAQs)
6.1 Are Peloton bikes made in the USA?
6.2 Where is Peloton building its largest manufacturing company?
6.3 Where are Peloton warehouses?
6.4 Who owns the company Peloton?
6.5 Where is Peloton shipped from?
6.6 Is Peloton a Chinese company?
7 Final Verdict

So, Where are Peloton Bikes Made?

The Peloton bikes are made in Taiwan, then shipped to the US in New York City for assembling. Primarily, Peloton partners with  Rexon and Tonic to manufacture the bikes.

Later on, Peloton acquired Precor, a company that had been making fitness equipment for a long time. Acquiring the company helped Peloton prioritize their bikes and treadmills, better meeting the increasing demand.

Surprisingly, not even owning Precor could quench the demand for home fitness bikes and treadmills. For this reason, Peloton equipment is still expensive, given that a large part of the manufacture is done in Asia.

The good news is that Peloton recently acquired land in Ohio, USA, where they are building a manufacturing plant. The plant will lie on approximately 200 acres of land, and it will majorly concentrate on Peloton bikes and treadmills.

So, A Peloton Manufacturing Plant in Ohio, USA?

Peloton Output Park, POP, is Peloton’s name to the new plant in Ohio. It sits on 200acres of land, while over a million square feet accommodate the office, manufacturing space, and amenities space.

Ohio Governor Mike DeWine said that the county was delighted to partner with Peloton and looking forward to the privileges that will come with hosting the technological company.

There are several advantages that Peloton will gain from the new, hefty investment, among them being;

Suppliers of the Peloton Bikes

Rexon and Tonic deliver the Peloton bikes to the Peloton company. However, Peloton has its delivery team that supplies the bikes to the owners. When the demand is too high, which it is almost always, Peloton contracts third-party companies such as XPO Logistics.

Luckily for you, you don’t have to bother about who delivers your bike; Peloton customer care will always reach out in advance to inform you of your bike suppliers.

Peloton bikes are supplied in the USA, Canada, UK, Germany, and Puerto Rico. Lately, Peloton is also shipping to Australia. However, the company has only confirmed the availability of the digital app, the Peloton standard bike, and the bike plus. In addition, the treadmill is yet to be confirmed in the new continent.

Making of the Peloton Bike

The Peloton bike consists of a stationary exercise bike and a touchscreen. Let’s get into the details of its design;

Essentially, the Peloton bike and bike plus frames are welded steel construction. Additionally, the material is powder-coated, protecting the steel from environmental factors.

The hard seat is a sports series model, which is durable and quality. It has an ergonomic channel, which facilitates breathability and prevents seat hotspots. Though it may require a seat cover or padded cycling shorts or pants for -comfort, the hard seat rarely wears out. On top of that, the bike seat is adjustable both in-depth and in height. Combined with height-adjustable handlebars, users between 4’11” and 6’5″ can comfortably ride on the bike.

Both resistance systems are magnetic, offering a smooth adjustment that doesn’t affect performance. However, the resistance on the standard bike is mechanical, which means that the adjustment is manual. On the other hand, the bike plus has a digital resistance control system.

Who wants a chain drive that clicks whenever it is not sufficiently oiled while alerting the neighbors whenever a ride takes place? Of course, no one. For this reason, Peloton uses a belt-drive, which does not need oiling for maintenance. Most importantly, the belt drive is a Poly V power transmission construction on either Peloton bike. It facilitates a quiet and smooth ride that ensures you don’t cause disturbance in the house or neighborhood.

Then there is the crank arm, which is strong and forged steel 170 mm long. They are safe for handling the user, even when standing on the pedals during training.  Besides that, the bottom bracket boasts of industrial grade bearings, which have an ISIS splined spindle.

They hold industrial-grade aluminum pedals, which are also sturdy and resilient to the harsh cycling environment. In addition, the pedals are clipless, in the Look-Delta design for 3-hole Look Delta cycling shoe cleats.

Moreover, the Peloton bike is fitted with small and smooth transport wheels, which allow movement within the room or on flat ground.

Then there is a heavy flywheel fitted at the front, which is approximately 38 pounds. Thus, it can be said to be heavy, and it couples with the magnetic resistance and the belt drive for the smoothest indoor experience you can have on a spin bike.

Finally, the stationary bike is fitted with an Android touchscreen. The touchscreen has the peloton app already installed, and it is the first platform you see once you log in. On the standard Peloton bike, the touchscreen is 21.5 inches, while 23.8 inches in the bike plus model.

The tablet sits on the bike’s handlebar area, designed to accommodate it efficiently. In addition, it seamlessly connects to Wi-Fi wireless, Bluetooth, and Ant+ devices.

Moreover, the tablet has a power button and volume buttons that facilitate the regulation of the screen. On top of that, the screens have ten multitouch points, which one uses to navigate the screen.

There is a front-facing camera on each Peloton bike, which uses 5MP on the standard bike and 8MP on the bike plus. The bike plus camera also has a privacy cover during video calls. Technically, the camera on the touchscreen is meant for profile photo selfies and video chats during Peloton classes. A built-in microphone further enhances the chatting feature.

Over and above that, the tablet has ports supporting headphones, USB, and the tablet charger. The bike plus uses the contemporary USB-C charging system, while the standard bike uses a micro USB charger.

Last but not least, there are speakers on the tablet, which enhance music and sound during classes even without an external speaker. The standard bike features two rear-facing stereo speakers, while the bike plus has four, with two front-facing and two rear-facing speakers.

However, one can also download the digital app version on most smart screens. The digital app doesn’t require a piece of Peloton equipment, and it costs $12.99 per month, with only one account option.

With either membership option, the Peloton app allows access to a vast library of on-demand classes, as well as scheduled live classes.

The Peloton classes include;

All these are broad categories, and the on-demand classes have filter options that narrow down the classes to specifics. For example, the filters allow you to narrow to specifics by the instructor, class type, bookmarks, difficulty level, music, and sub-title (language). In addition, there are three language options, English, German and Spanish, in almost all the Peloton class categories.

The Peloton classes are run by expert instructors who are great at training and fantastic motivation coaches. They interact with members in live classes through shoutouts and high-fives and on social media platforms.

Are Peloton bikes made in the USA?

Not fully. Peloton bikes are mostly made in Taiwan. However, beginning 2023, the American Peloton manufacturing plant should be ready.

Where is Peloton building its largest manufacturing company?

The new largest manufacturing plant for Peloton bikes and treadmills will be in Ohio in North America. Peloton acquired 200 acres of land for the plant.

Where are Peloton warehouses?

As of known, there are 23 peloton warehouses and the largest distribution center in Linden, New Jersey. It is the biggest Peloton center with over 800,000 square feet!

Who owns the company Peloton?

John Foley, the Founder and CEO of Peloton. He acted as the chairman of peloton board of directors since April 2015.

Where is Peloton shipped from?

Peloton frames are made in Taiwan and sent to the United States, where they are assembled and kept in one of the company’s 23 warehouses before being delivered and installed in homes by the company’s staff.

Is Peloton a Chinese company?

No, It’s not. Peloton is an American company that began operations in New York City. Peloton currently manufactures the majority of its treadmills and indoor exercise bikes in Taiwan at third-party facilities.

Peloton bikes are made in Asia and partly in North America. However, the company’s new American manufacturing plant is underway, and it should help increase the bike and treadmill supplies.

So, Peloton equipment delays may be partly due to the long process of acquiring and assembling the bike parts from across continents. However, the delays are about to be minimal, with the hope of a larger company dedicated to Peloton equipment.