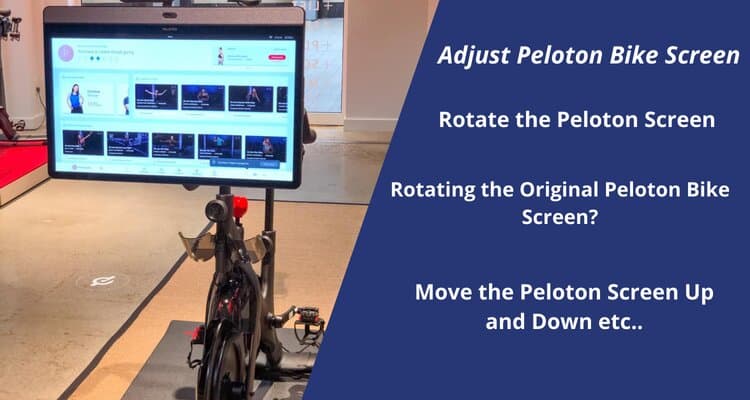 Is it difficult to adjust the Peloton screen? Is it something you can do on your own? Of course, it is. Just read on!

How to Rotate the Peloton Screen

So, when rotating the screen, ensure that it is at a vertical angle and not tilted. If at a tilt, bring it back to the straight vertical angle. Then, rotate it to your desired position, to a maximum of 180 degrees on either side of the screen.

The best part about the screen rotation is that your floor and off-bike workouts are not limited to specific points. Whichever position you chose to workout from, the screen will rotate to suit your position and location.

As we mentioned earlier, it is impossible to rotate the original Peloton bike screen. But is it really impossible? What if I told you that there was a way to get around this limitation?

Today, there are swivels that you attach to your original peloton bike screen, which allow a 360-0degree rotation. Actually, unlike the bike plus half-half rotation, these swivels allow a complete 360-degree rotation. Check top two of these products;

Other than the 360-degree rotation, the screen swivels allow the screen to tilt at all angles, depending on your convenience preference. Built for the original Peloton bike, the swivel is compatible with the bike. However, since it is only meant to bring the standard bike closer to the Peloton bike plus convenience, the swivels are not for the bike plus.

Nevertheless, always ensure that you get strong and quality material for the safety of your screen. The material should also be rust-free, which will enhance a smooth tilt and rotation even after prolonged use.

Therefore, you no longer need to cast your off-bike Peloton workouts on a TV, especially if you are working out alone.

Now you don’t have to worry about not owning a bike plus, as with less than 50 bucks, you can have the screen rotation function on your standard peloton bike.

How to Move the Peloton Screen Up and Down

This is usually the most common challenge among Peloton users. The best part is that when using the bike or bike plus, you can move the Peloton screen up and down. You simply move the handlebars either higher or lower, which in turn raise or lower the touchscreen.

The Peloton handlebars have a height adjustment knob, which is located at the handlebars bike frame. Rotate it anticlockwise to loosen the handlebars, then raise them or lower them accordingly.

Have you found yourself uncomfortable during a ride simply because your elbows and hands keep knocking the screen? Or block some content from the screen? In this case, you will need to pull the pole holding the touchscreen outwards gently. Try to be gentle without forcing it out so that you protect the screen maximally.

How to Tilt the Peloton Screen Up and Down

A better way to get the screen out of your way and even get a better view is by tilting it upwards. You can also tilt it downwards and to the side for the most suitable workout view. When on the floor for strength and yoga classes, the best position is downwards. On the other hand, you may need it straight or a bit raised on the bike.

When tilting the peloton screen, Hold the screen on the top and bottom parts of the screen for stability. Then, tilt it without forcing it in the direction of your comfort view.

Adjusting the Peloton screen is a DIY that you can finally practice on or off the bike. Whether you own the older Peloton bike or, the newer Peloton bike plus, there are no limitations to using your screen and peloton workouts to your advantage. Remember that the screen adjustment options guarantee your comfort watching on and off the bike. So, no more neck pains and eye strain caused by using the screen as fixed by the delivery team, which may not suit you best.