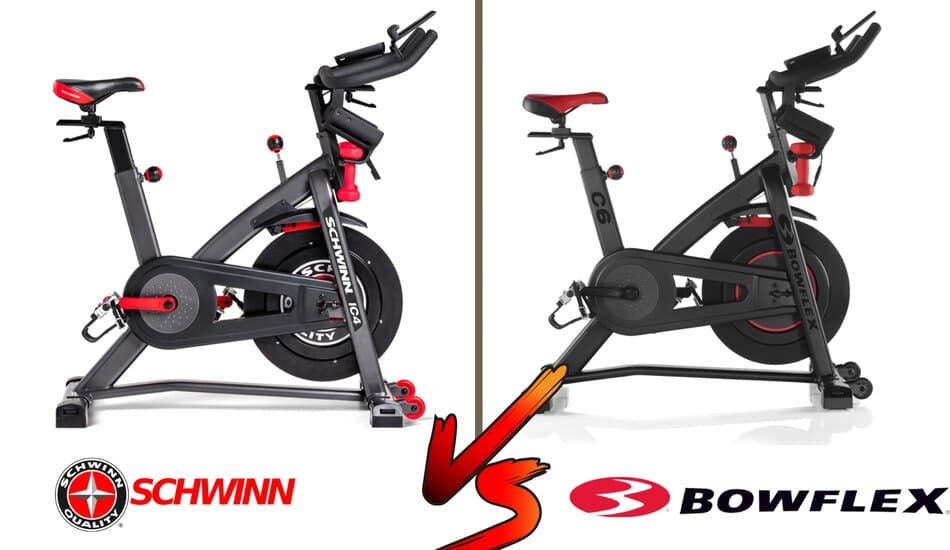 Nevertheless, there is always a reason why a company would make two competing bikes with different names. While optimizing business profits is one of these reasons, there is more; the company wants you to have options. Therefore, there must be at least one reason why you would choose one over the other.

Getting interested? Let’s get the show on the road on the similarities and the differences between Schwinn IC4 and Bowflex C6;

Let’s have a look at a summary of the differences and similarities between the two fitness bikes;

Here are reasons that make it so difficult to decide which of the two bikes should win your heart and is worth your expenditure;

1. They are Nautilus Company Products

If you have been following Nautilus, you must know that the company makes affordable products of high-end value. They may compromise some features for the cost, but never the quality and durability.

So, if you want a product from Nautilus, both bikes show up. Which one do you choose? After all, the price difference is relatively small.

The two bikes come with steady tablet holders. Though they don’t have tablets of their own, at least you have the alternative to use your tablet or iPad.

Moreover, the bikes come with large LCDs, which take your heart rate and pulse, record the calories burned, distance, and time on the spinning workouts. The screens are Bluetooth compatible, so you can connect them to your tablet and the heart rate monitor you are using. Hence, you still manage to maximize your workouts.

The tablet holders without a tablet also give you the freedom to use whichever workout app you prefer on the bikes. Furthermore, the LCD is compatible with several renowned and effective workout apps such as; Peloton, iFit Coach, Zwift, Echelon, TrainerRoad, among others. This means that you can be on Peloton or Echelon while on your inexpensive bike. Better still, you have the option to explore other workout app options out there with your bike.

Both bikes have dual-purpose pedals, allowing for cycling shoes diversity. On one side, you have clipless pedals in the SPD version. Hence, you can use clip-in shoes for maximum power transfer when you want the best out of a competitive class such as Peloton.

The opposite side of the pedals has toe clips, which allow you to ride with casual shoes. In addition, if you have another family member that wants to ride on the bike but has no cycling shoes, they can always take advantage of the toe cages.

Whether you take Schwinn IC4 or Bowflex C6, you will get a magnetic resistance system. Also, either bike offers up to 100 levels of resistance, allowing you to try out different riding challenges. Finally, the flywheel, 40lbs, will give you precisely what you are looking for in excellent resistance.

As long as you purchase one of these Nautilus brands, you get the same warranty conditions. The warranty offers a 10-years guarantee on the frame, three years on all mechanical parts, and one year on repair and bike check-up labor.

You get either bike without paying for shipping, as it is free. Once you purchase the bike, you just have to wait for its arrival.

The two bikes have more attractive accessories which the package comes with, and all without additional costs.

They come with a set of dumbbells weighing 3lbs, which you can use on the bike or for low-impact off-bike strength workouts. Then there is the armband, which is Bluetooth compatible and a great start to take your heart rate and calories burned. On top of that, the bike has two strategic water bottle holders to ensure that you don’t get off the bike to replenish your hydration.

All spinning bikes have a maximum weight put on a user. For example, Schwinn IC4 and Bowflex C6 both have the same user weight limit, 330lbs.

After all, both bikes are of the same weight, 106lbs, without incorporating the dumbbells. They also have the exact dimensions, 48.7 inches length by 21.2 inches width by 51.8 inches height.

Here are notable differences between the two bikes, which will determine which of the two you finally end up with.

The bikes are really affordable, each going for less than $1000, not to mention that they save you from buying the first dumbbells and heart rate monitor. Nevertheless, the bikes have a cost difference, which is major in determining the bike you consider.

Both bikes have payment plans that allow a budget purchase over a period of 18 months. So, with the Bowflex, you pay $56 every month for 18 months, while you pay $50 per month for the Schwinn $model.

A difference is a whole 100 bucks goes a long way into making Schwinn IC4 a top choice if you are on a budget. After all, there is not much difference in the performance and quality to warrant spending an extra amount.

Nevertheless, if you deserve military benefits, Bowflex may prove cheaper than it is for civilians. The brand offers military discounts, which is not the case with the Schwinn bike.

All in all, you may find other attractive benefits, vouchers, and discounts on either bike, especially on significant occasions such as Labor Day.

When you look at the two bikes closely, you will realize that they have quite some physical outlook differences. It may look negligible to you, but some of us would also like a few choices for the gym outlook.

So, the Schwinn IC4 displays a sporty outlook, with a black frame accented in red and white. On the other hand, Bowflex is primarily the bike color, with accents of red on a few conspicuous points.

Over and above that, Bowflex has a sleek outlook compared to Schwinn IC4, though the two have similar measurements. Therefore, if sleek is for you, the 100 bucks are actually worth the more expensive model.

Though the two bikes are from the same manufacturer, you must have realized that the brands differ from the names. In the same way, the bikes have different retailers. Bowflex is only available on the Bowflex website, and it is here that you will get the military and other discounts.

However, Schwinn has a number of retailers, starting with Schwinn to other major stores. Thus, Schwinn is more accessible compared to Bowflex, giving it an advantage.

Why You Should Consider Schwinn IC4 Over Bowflex C6

Why You Should Consider Bowflex C6 Over Schwinn IC4

Between Schwinn IC4 Vs. Bowflex C6, which one is better? The good news is that both bikes match in strength and output when it comes to quality and performance. However, there are slight differences between the two bikes, all of which will not affect how you perform on either bike at all.

That being said, if you want a cheap alternative and don’t care about a sleek outlook, you will save 100 dollars with Schwinn IC4. On the other hand, if a classier sleek outlook that almost resembles a Peloton takes you to the moon and back regardless of the 100 extra bucks, you can go for Bowflex C6. after all, if you qualify for military benefits, you will spend less than the 100 bucks more.