Jenn Sherman is one of a kind, always reminding us that she is the oldest Peloton instructor. And she actually is; she was the first instructor on Peloton, and she is also the oldest, at 52 years. 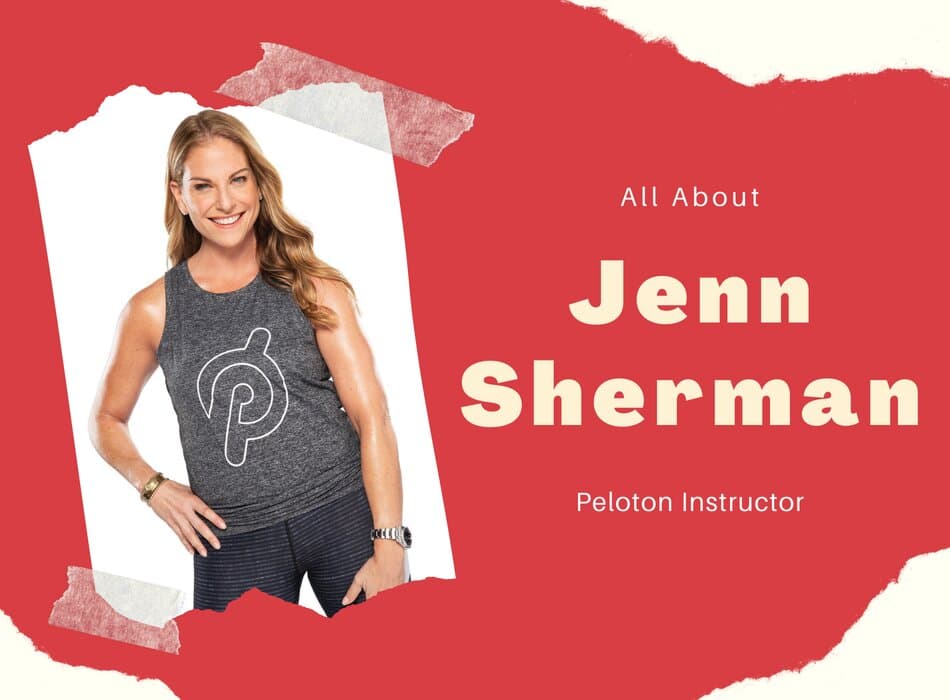 Despite her age, no one can deny the beautiful nature of her classes. The senior woman never ceases to amaze her fans with a new playlist that definitely fits into her class. Then there is her, with her millennial body at her age.  And there are so many more interesting facts you must be dying to know about the senior Peloton instructor, Jenn Sherman.

Jenn Sherman was born in 1969 and raised in Fort Lee, which is in New Jersey. She joined Syracuse University in the late ’80s and earned her Bachelor’s degree in 1990.

She always loved working out, aerobic workouts to be specific, and would head off to SunDown Fitness near the University with her friends. She was also in love with chicken wings from the Varsity Pizza and an occasional clubber. Usually, she would talk about the basketball teams with her friends since she has always been a fan.

Sherman got married and is a mother of two. She says that she’s with her son and daughter, Evan (20), and Carly (17), when she’s not working out. She also mentions her husband occasionally, an indication that the family is happy.

As we have seen, Sherman was always in love with working out. So when her kids went to school, she couldn’t wait to get back to the gym. However, something was different this time; she tried spinning. Amazingly, she fell in love with the bike the first time she tried it. She went on to pursue spinning as a career, to become a certified instructor one year later.

Jenn Sherman was ready to open her spinning studio. However, in 2013, she came across Peloton. At that time, it was neither popular nor with many fans, as it was just starting. Nevertheless, John Foley, the Peloton CEO, accepted her application, becoming the first Peloton spinning instructor.

Being among the best and most popular instructors and having been in Peloton for the longest time, Jenn earns a lucrative salary. On top of that, like all Peloton employees, she has shares in the company. And gauging from the rise in Peloton shares in the past one-year plus, this has also worked in her favor.

Sherman is mostly in spinning classes and the spinning spin-offs. If she is not in a regular spinning class, she is in the bike Bootcamps or HIIT and Hills classes.

Her classes stand out with specific music genres. She can decide on an ’80’s playlist, and she’s on a specific artist or a specific theme. The best part is that all her diverse playlist tracks seem to intrigue her class. You will never miss comments about the playlist in the comment section whenever the discussion is with or about her.

Jenn Sherman also gives shoutouts and high-fives to her class more often and cheers them up during classes. And, more often than not, she will give one or two shoutouts to NFL fans and players. Then there is her Syracuse University, where she schooled, whose alumni she will always identify on the Leaderboard.

Generally, Jenn tops the list of popular Peloton instructors. Her class is always having a minimum of hundreds, indicating the love that fans have towards her classes.

What’s Up with the Jenn Sherman Snobs?

In October 2020, Sherman had a 60-minute Yacht Rock class, which started well but ended with sour comments. During the class, she threw in a joke about how she could bear seeing the White House brought down by CoronaVirus but couldn’t bear the Virus affecting the NFL.

While some understood the comment as lightly as she meant it being an NFL fan, not everyone did. Some went ahead and threatened to boycott the class unless it was brought down.

One user went ahead and wrote a letter of disappointment to the Peloton CEO, John Foley, regarding the issue. He started by appreciating peloton classes, then went ahead to say that things would be different if Peloton started politicizing classes.

The Peloton CEO  apologized to the user and promised that the mistake would not be repeated. He also said that the class would be removed from the on-demand class category immediately affected.

Sherman also handled the criticism with optimism, and in her next classes, she seemed as well as before. Even better, she considered them and never has again, even in a joke, ‘politicized’ a class.

Though most of her fans feared that she would no longer continue with her classes, she still trains. Therefore, if you are a fan, you can still book a live class with her. Alternatively, you can go to the cycling option on the on-demand section, then filter the instructors to Jenn Sherman to experience with the amazing instructor.

Jenn Sherman, the 52-year-old Peloton instructor, is a figure to reckon with. She has a great following on Peloton platforms and social media, and her classes are worth attending.

More than that, she had had a difficult time on Peloton, when her class had to be brought down due to user criticism, but she still managed to rise and smile.