Aditi Sha is a lovely yoga instructor on Peloton who brings the authenticity you would love in a Peloton class. And don’t mistake me; her yoga classes are not the traditional type you would imagine from an Indian yogi. On the contrary, a beautiful blend of traditional and contemporary twists and moves makes Aditi one of the most popular instructors. 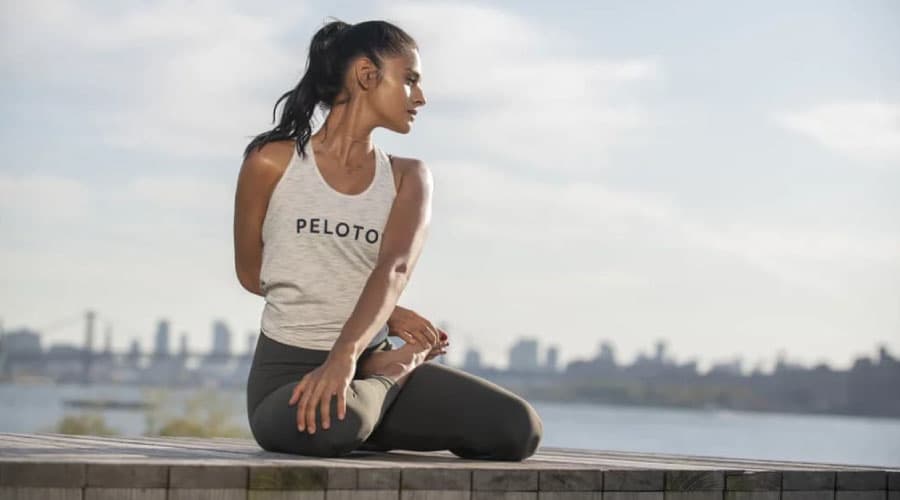 Other than yoga, you will be surprised to find out who Aditi actually is; fun-loving, adventurous and easy to interact with sort of girl.

I also have more on her current marital status, age, career growth, hobbies and… read on!

Who Is Aditi Shah?

Aditi Shah is a young South Asian Peloton yoga instructor. She is so flexible you will stop questioning her expertise in a field once left to middle age to elderly instructors.

The Peloton instructor is also outgoing and easy to interact with. I love the video of her and Anna Greenberg’s special greetings that they, unfortunately… wait, fortunately for us, exposed on mother’s day. (Anna Greenberg is her fellow yoga instructor in Peloton).

On top of Peloton, Aditi Shah enjoys her personal life. She has an apartment in Brooklyn, where she has a stack of books (that she reads, by the way) and an ample space she seems to love.

She also says that she practices mediation on a daily basis, and yoga is part of her life even when she is not at work.

Aditi Shah is further close to her parents, especially her mom. She has posts of them together as a family, and a couple of videos of her and her mom, who also seems as fun-appreciating as her daughter.

At a glimpse, here is Aditi Shah;

There is no public information about her early life, especially her exact date of birth. However, she was born in New Jersey and grew up there. Later on, she moved with her parents to India.

She had a career between USA and India, where she worked as a model and as an actress. She has worked with Innovative Artists, and she also featured in a number of films and TV series. Among the most popular films, she featured include OMG, Elementary and Crashing.

However, she quotes that the careers never seemed to give her satisfaction. It was then that she decided to concentrate on yoga, this time as a profession.

Life as a Yogi

In general, Aditi Shah has always exercised yoga in her life. As a little kid, she says that her parents told her that it was the best way to connect with her inner self.

This came to make sense later in life when she realized how much consistent yoga and meditation shielded her from losing herself in the digital mess most young people are entangled in.

So, when her career as a model and an actress failed, Aditi started realizing just how much she loved yoga.

Back in India, she decided to study yoga more deeply. And where better to do the yoga studies than right in India, the source of yoga?

That’s how Shah’s journey generally as a yoga instructor started.

She came back to the USA, where she would train people in yoga. She says that her passion was to help people let go (obvious even in her classes today) and embraces their inner selves.

She would help people with private yoga lessons, attend yoga workshops and be generally active as a yoga instructor. Her passion for exercise was impressive, especially given her young age.

However, it was also probably due to her young age that she was able to revolutionize yoga. As a result, people would see it differently and even consider it, despite previous prejudices.

Actually, she has led a couple of thousands of people in yoga in Time Square, helping people overcome anxiety and embrace their strengths.

Aditi Shah was one of the first yoga instructors hired by Peloton to help the company get started with yoga. Therefore, we definitely owe her applause for the growth of yoga in the company.

However, if she were dull and naive, Peloton would probably not enjoy the yoga clientele it has today.

As a whole, Aditi coaches yoga and meditation in Peloton. She can take you through any form of yoga or meditation, and you will still like it.

The music also flows excellently with the lesson, leading to daily applause from fans. However, my favourite bit is her motivation. The way she handles herself in class, the flexibility of her body and her comprehensive knowledge of yoga.

She can separate her fun life from yoga and meditation, where you cannot afford to feel hyperactive. Instead, she is ever calm. In addition, her language will easily allow you to exercise even when your child is around because there are neither cursing words nor vulgar language.

Aditi has created a strong bond with the Peloton family when out of Peloton. Her Instagram and Facebook posts show how close she is to them.

Undoubtedly, Peloton’s Aditi Shah is a charming woman. For this reason, many would love to know about Aditi’s sexual preference and marital status.

Aditi Shah is straight, and she has a fiance, Lawrence Anthony Peccatiello. He is the co-founder and CEO of Parallel markets. In a Facebook post on his birthday in 2020, Aditi showered her love with a beautiful Facebook post.

She went ahead to tell the world more about him; he practised yoga for a long time, just as Aditi did, even before the two met. He is also great in the kitchen, and she gave his first name, ‘Lawrence’, to her viewers.

Aditi and Peccatiello had planned to get married in March 2020, but the Corona Virus pandemic put a halt to the plans. However, Aditi said that she had accepted Peccatiello’s marriage proposal, but on the condition that he visited India before the marriage.

However, just when they had planned the visit, India put a stop to any flights to India, hence delaying the wedding. The couple postponed it to the following year, 2021, though they haven’t updated any news so far.

Aditi may be outgoing and with lots of self-pics on her social media pages, but she has kept her relationship quite out of the limelight. However, a wedding will definitely be a big thing for her and the Peloton family, so I will update you on the news when available.

Aditi Shah’s favourite food is a vegan meal, and she tries to avoid processed sugars. So it is no wonder she has maintained such a youthful and toned outlook.

Aditi is relatively active on social media, especially on Instagram. Here, she goes by the username diti22, and she posts about both her personal life and updates on her Peloton developments. Most of her fans are from Peloton, and there are 159k users who follow her.

She is also active on Facebook as Aditi Shah, where she has garnered 6.2K followers.

Aditi Shah, the calm Peloton yoga instructor, is capable of helping you restore mental and environmental serenity during a yoga or meditation class.

She is popular among Peloton users, and her fans do not conceal their love for her.